The bridge  between Nuclei and Stars

What are the properties of nuclear matter which lead to the spectacular phenomena of supernovae explosions? What is the nature of neutron stars?

Neutron stars are among the most fascinating astrophysical objects and they play a central role in many astrophysical events such as supernovae, X-ray bursts, and possibly gamma-ray bursts. They are collapsed stars with roughly the mass of the Sun and a radius of only a dozen km or so. They are some of the densest manifestations of massive objects in the Universe. Nevertheless, they are probably made of neutron-rich matter similar to that in ordinary atomic nuclei. Their structure and evolution are therefore largely determined by Nuclear Physics.

The basic properties of neutron stars such as their mass, radius, and cooling behaviour are determined by the nuclear Equation of State (EOS).  A key unknown of the EOS is the density dependence of the symmetry energy, which quantifies the change in nuclear energy associated with modifying the neutron-proton asymmetry.

Heavy nuclei, even though orders of magnitude less massive than neutron stars are governed by the same physics, which is enshrined in the EOS. 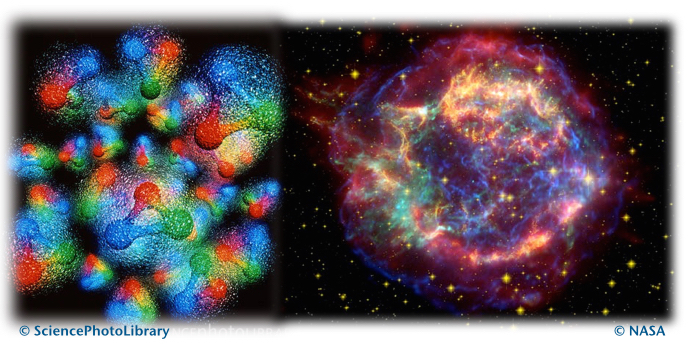 In particular the neutron radius of a heavy nucleus is strongly correlated to several neutron-star observables. The size of a heavy nucleus is thought to be determined by its neutrons since they are more numerous than its protons. Where do the extra neutrons go? Are they at the center or are some of them at the surface forming a neutron-rich skin?

This simple question involves many important issues. Information about the location of neutrons inside a nucleus has been historically elusive. An accurate determination of the thickness of the neutron skin of a nucleus would provide a unique experimental constraint on the symmetry energy and ultimately on some critical properties of supernovae and neutron stars.

In the Standard Model the weak charge of the neutron is large, whereas it is small for the proton. Parity-violating electron scattering therefore provides a very clean probe of neutron densities. Intermediate energy photons provide another way to probe strongly interacting nuclear matter. In particular, coherent pion photoproduction from nuclei is an attractive technique for obtaining information on neutron skins, which is much simpler experimentally than parity violation. However, this technique exhibits a large systematic error due to the necessity to account for the pion-nucleon interaction.

We implement both methods  at the accelerator facilities at the Institute of Nuclear Physics.

The simultaneous combination of both techniques will allow a systematic determination of the neutron skin thickness for a variety of isotopes for the first time and hence strongly constrain the nuclear Equation of State. The results will have remarkably broad implications for nuclear structure, astrophysics, atomic parity violation and low energy tests of the Standard Model.