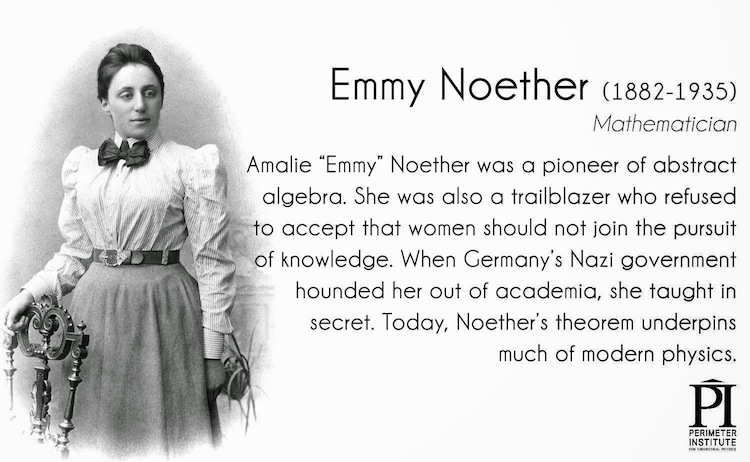 Physicists love symmetries. In fact, it can be and has been said that all of modern physics is based on a bunch of symmetry principles from which the rest follows. While that may be a bit overly reductionist, it is certainly true that symmetry considerations play a huge role in the building of our understanding of the universe.

But why is that so? The quick answer to this questions is “because of a theorem” that links the existence (or absence) of certain symmetries to the laws of nature.  For those of you who are not familiar with complex math and the profound meaning some math theorems can have by searching around I found a nice answer to the question: “How can one explain the relation between symmetry and conservation laws in non-mathematical terms?“. “A “symmetry” is an if-then rule: if X, then Y. It’s a kind of constraint on the universe: every time you see X, there will be a Y. The universe is full of symmetries, like “If you see something happen at point X, then the same thing will happen anywhere else in the universe under the same conditions at Y”.

The profound connection between symmetries and conservation laws has been discovered and put in mathematical terms by Emmy Noether: Noether’s rule says, “If you have a symmetry, you can write an equation in terms of a conserved quantity“.  From “the laws of physics are the same regardless of where you are” (position invariance), we derive the law of conservation of momentum. I can look at a physical phenomenon from the the centre of the sun, the centre of Sirius, or from the bridge of a hypothetical interstellar spaceship and I won’t notice a difference to the form of the laws of the universe From “the laws of physics are the same regardless of when they happen” (time invariance) we get the laws of conservation of energy. The laws of nature look exactly the same regardless of whether I put the zero of my timeline at the founding of Rome, the birth of Jesus, the Hijra, or the iPhone epoch. Invariance under rotations (i.e. the fact that there is no “up” and “down” in empty space) implies the conservation of total angular momentum. 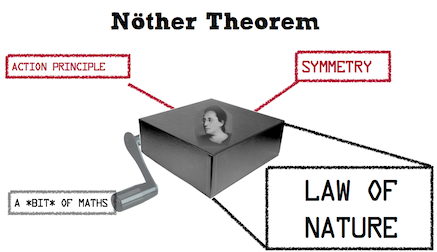 you should be able to realize how profound the consequences of such a black box are: take an ideal mixer and put inside the principle that nature is lazy (this fundamental principle is the action principle and a.o. it can demonstrate in a rigorous way why light appear to travel in straight lines), some symmetry and use math to make it shake. What will come out is a fundamental law of nature.

Conservation of energy, momentum and angular momentum are not the end of this story. The connection between symmetries and conservation laws spans over whole physics, down to the subatomic world. Things get in particular extremely interesting by the time a symmetry is absent of even violated .

If you are interested in learning more about the subject I strongly recommend a great book “Fearful Symmetry“. It tells the story of modern physics and contemporary physicists in a clear, understandable and vivid way. It makes the `fearful’ symmetry simple and accessible. Here is a small extract of the foreword:

“The notion of symmetry has manifestations that are widespread in human culture. Symmetry also exhibits itself in a great many features of the operation of the Natural world. It is a notion that is simple enough to be understood and made use of by a young child; yet it is subtle enough to be central to our deepest and most successful physical theories describing the inner workings of Nature. Symmetry is thus a concept that is simultaneously obvious and profound.

Symmetry has many areas of application. Some are basically practical, such as those made use of in engineering or, at a more mundane level, in the satisfactory creation of furniture. But other uses of symmetry are more evidently purely aesthetic, and can be central to many artistic creations, where it may provide a key ingredient underlying the sublime beauty of various great works of art.

In mathematics, the notion of symmetry is the starting point of vast areas of deep theory, providing much penetrating insight of enormous scope. In the science of crystallography it is crucial, as it is also in many aspects of chemistry.

It is in modern fundamental physics, though, that we find the most subtle interplay between symmetry and asymmetry, for, as twentieth-century physics has revealed, there is a special role for symmetry in Nature’s basic forces that is both central and sometimes enigmatically violated. “